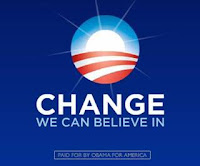 Change is an interesting and powerful notion and some even argue is the reason Barack Obama was elected into office. His message of change resonated with many people. Change is powerful, it speaks to a very tricky part of the brain.

Change promises a different future, a different tomorrow. It makes the brain anticipate the future and, in doing so, it imagines or systematically creates a future that is almost always much more extreme than the reality. This is what the human brain does best compared to all other species: namely "imagining". Albert Einstein said once that imagination is more powerful than knowledge. It's true; it is by far the most powerful characteristic of the human brain. But the question remains: does imagination feed on change? Is there much less or no imagination in the absence of change? I am not talking about creativity here, solely pure imagination. If everyday is rather the same as it has become lately for some of us, then why imagine a better tomorrow? Why imagine a tomorrow that is different than today? What is the motivation when at some juncture it becomes obvious that imagination is futile?

This is a dangerous notion, because I believe when people stop imagining, they stop living and begin existing as pure physical beings. As unrealistic and fairy-tale like as it might sometimes be, imagination is an important function of the brain. People who suffer from depression and anxiety often lose the power to imagine; some could even argue they become pure realists. They see the world as it exactly is: a cold, unfair and lonely place. Happier people tend to have vivid, wild imaginations. Take religious people for example. They believe in God and his promise of a better "tomorrow" or "life after death". Again the words here, "tomorrow" and "promise," are key; they motivate a person to imagine a better tomorrow, a safer, healthier and happier tomorrow. This is precisely why religious people tend to be happier and enjoy a better quality of life.

Now take kids. Kids tend to be happier than adults, but why? Because they do not see the world as it really is. In children's minds, they can become whatever they want to become. They can be a princess, a doctor, superman, a dog, a cat...they live purely in their imaginations. Because they do not perceive reality as it exists and are protected from the world, they appear to be much happier than their elders.

Life slowly but surely exposes us to the laws of nature, society, culture, and governments and in doing so helps us distinguish the two different worlds of imagination and reality. The more we are exposed to reality, the harder it becomes to reconnect with imagination. Living in reality with no imagination is like working 24 hours a day 7 days a week with no time off to rest. But a life lived mostly in imagination and fantasy is also counterproductive and unhealthy, the right balance of both is key. A balance that need not be 50/50 or constant but rather evolving based on life experiences and circumstance. Someone going through very difficult times perhaps can use more imagination than reality for the short term as a coping strategy.

Now back to the idea of change. What if you have done and accomplished everything you once imagined you would, how would you direct your imagination so it keeps going? Politicians always talk about change to excite peoples imagination into seeing a better future with that particular candidate in office. Do then these politicians have to keep changing their message to remain exciting and relevant? A new promise or vision causes new imagination just like a new consumer product cause a new experience. Companies like Apple keep offering new products to remain competitive and attract users, the question then I have is, do we as humans, have to keep changing our circumstances or life goals to keep our imagination alive?