Interesting article I read (NYTimes: Do You Suffer From Decision Fatigue) about how the more decisions we make throughout the day the less logical and more emotional those decisions become. Also the more we resist temptation the more we deplete our willpower so perhaps going to a strip club after a day of shopping is not a good idea. What's interesting about this article is that, research shows that consuming sugar tends to restore our decision making and willpower but only temporarily. The author makes the point that because poor people have to make more decisions due to financial constraints, they make more poor decisions because of decision fatigue and low willpower but they also consume more unnecessary sugar as a result. I put together the following graphs to help me better understand this article, maybe you'll find them interesting: 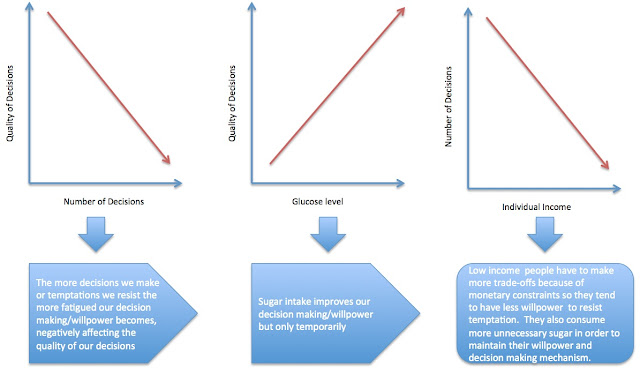 Below are the main points of the article: