Does Freedom of Thought & Expression Lead to More Conformity?

These thoughts were inspired by the excerpt below from Zizek's Welcome To the Desert of The Real:

We ‘feel free’ because we lack the very language to articulate our unfreedom.
The only way to secure social servitude is through freedom of thought.

In an old joke from the defunct German Democratic Republic, a German worker gets a job in Siberia; aware of how all mail will be read by the censors, he tells his friends: 'Let's establish a code: if a letter you get from me is written in ordinary blue ink, it's true; if it's written in red ink, it's false.' After a month, his friends get the first letter, written in blue ink:


'Everything is wonderful here: the shops are full, food is abundant, apartments are large and properly heated, cinemas show films from the West, there are many beautiful girls ready for an affair - the only thing you can't get is red ink.'

One starts by agreeing that one has all the freedoms one wants - then one merely adds that the only thing missing is the 'red ink': we 'feel free' because we lack the very language to articulate our unfreedom.

A 100 years ago, in his emphasis on the acceptance of some fixed dogma as the condition of demanding actual freedom, Gilbert Keith Chesterton perspicaciously detected the antidemocratic potential of the very principle of freedom of thought:

Following up on the excerpt above I like to argue not against or for Zizek/Chesterton's notion of freedom as a function of language but rather question freedom itself.  That is: Do people really want ultimate, total 'Freedom' or just the perception of it? My argument here is that freedom of thought and expression tends to lead to more conformity than diversity, more herd-like behavior than independent thinking or questioning, more group-think or belief than individual thought-process or thinking.  But why?  Why are people in the 'Free' West more trusting of authority and institutions while people in the oppressed East more trusting of close social circles and very skeptical of authority, media, viral memes and institutions?  Is it that 'Freedom' is always appreciated and celebrated only as a sacred notion that one can even fully posses but never to fully exercise?  Does this hindrance that prevents the ultimate experience and exercise of 'Freedom' guarantee its status as the sacred notion of desire? Is experiencing and exercising total 'Freedom' "too much" for people to handle? How would people behave in a totally 'Free' world with no institutions or legal structures to constrain or guide behaviors? 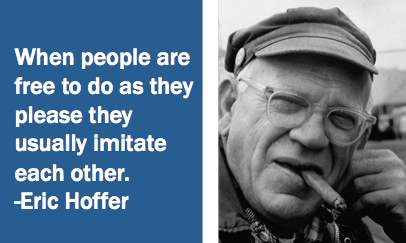 Here I agree with Eric Hoffer that people will by default seek conformity and create institutions to minimize the overwhelming feeling of anxiety and confusion that might come with making choices in the absence of institutions and legal and cultural norms and rules.  Then perhaps here Zizek is right to state that people only care about the perception of 'Freedom' "through freedom of thought" while unconsciously their decisions are being governed and manipulated by social, cultural and legal norms, rules and memes.  In this sense in the "Free" western democratic-capitalist societies we are always presented with options and choices of commodities which give us the perception that we are free to "choose" while our choices are, unbeknownst to our consciousness, being unconsciously driven by advertising, media and social memes that make us more conformist than 'Free'.  Here the person purchasing a home security system after seeing the advertising on CNN right after a news of a house robbery or theft thinks he is making a free, conscious decision while being unconsciously driven by his or her fear of theft triggered by the news+advertising input.  There are of course those 'rebels' as known as "Entrepreneurs" in capitalist societies who when faced with these choices do dream of options that don't exist and say what not?  But even these "Entrepreneurs" tend to merge around certain ideas or sectors that are more "popular" with the most financial reward.  In this case, even they are prone to herd-like mentally and mindset in their pursuit to disrupt current models and consumption habits only to start new capital-generating machines.


To reemphasize my argument here, it's as if 'Freedom' is too radical or too much to be subjectively experienced but can only be objectively believed as a notion.  Here I am reminded of a talk I attended about the future of journalism where a Reuters VP (Chrystia Freeland) mentioned with a bit of exaggeration that early in her career (as a reporter in Ukraine during the Soviet era with very little freedom of press or media) she would often see people on the metro reading great Russian literature and novels by Tolstoy, Kafka or Dostoevsky.  However, as soon as Communism collapsed, she began noticing that people started reading tabloids, porn and sports magazines.  Obviously she was not advocating for Communism style oppressive regimes but her observation points out the paradox of freedom and human nature.  As Freud put it humans unconsciously or by nature desire things that are unhealthy for a functioning society as a collective:

In this seminal book, Sigmund Freud propounds his perspective by enumerating what he sees as the fundamental tensions between civilization and the individual. The primary friction, he asserts, stems from the individual's quest for instinctual freedom and civilization's contrary demand for conformity and instinctual repression. Many of humankind's primitive instincts are clearly harmful to the well-being of a human community. As a result, civilization creates laws that prohibit killing, rape, and adultery, and it implements severe punishments if such rules are broken. This process, argues Freud, is an inherent quality of civilization that instills perpetual feelings of discontent in its citizens.  Via +Wikipedia

As such conformity is almost a necessity for the functioning of the collective.  This is one reason religions evolved and have been such a vital part of human history and evolution.  Through their stories, traditions and rituals, religions provide a set of laws and norms to guide and tame human nature to be able to exist and live as a collective.  As such we circle back to where we started and the paradox of freedom vs. conformity. Those who live under oppression seek freedom and those who have freedom seek conformity.  The best and ideal balance humanity has come up with so far as practiced in the west is freedom of expression while conforming to societal memes or ideologies.  The problem though with the free conformist society is that it tends to facilitate inequality.  As people seek different memes and ideologies to conform to, they further isolate themselves from the rest of society, ideas, thoughts and experiences.


Some recent social networking analysis studies have in fact shown that even in the free internet and across social media platforms people tend to gravitate around specific ideologies or beliefs instead of being randomly spread out across a range of beliefs or ideals as we would expect from "free" and "independent thinking" individuals.  This is where the modern human mind stands: It wants the freedom to think about everything but secretly limits itself to certain ideas or beliefs.  Here we observe a reversal of the philosopher in Plato's cave theory:

Plato describes a group of people who have lived chained to the wall of a cave all of their lives, facing a blank wall. The people watch shadows projected on the wall by things passing in front of a fire behind them, and begin to ascribe forms to these shadows. According to Plato, the shadows are as close as the prisoners get to viewing reality. He then explains how the philosopher is like a prisoner who is freed from the cave and comes to understand that the shadows on the wall do not make up reality at all, as he can perceive the true form of reality rather than the mere shadows seen by the prisoners. Via +Wikipedia

The free mind lives outside of the cave but having been overwhelmed by reality and freedom of the outside world, seeks shelter in the conformity of the cave even though inside the cave the images are merely shadows of reality.