This blog was inspired by an article titled When Stores, and Credit Firms, Watch you Shop by the American Public Media's Marketplace.

Here is an excerpt from the article emphasizing how far advertising has infiltrated our lives. Not only Ad agencies and companies like Google track our browsing and online activity history to target us with the most relevant Ads, they are also tracking consumer behavior offline. This allows them to not only recognize our consumption needs, they can also manipulate those needs by showing us Ads that target our deepest emotions or insecurities when we are most vulnerable (For example: dieting Ads on a Cake Recipe blog or or Ads about home security next to an article about theft).

The camera records passersby, and a software program sorts them in real time, dividing them up by age category -- child, adult or senior -- and gender. Experian assigns shoppers one of 60 consumer profiles, such as Dream Weaver, people with six figure salaries and a penchant for tech gadgets, or Struggling City Center, people on tight budgets, who tend to like watching talk shows.

Though consumer profiling algorithms are still not very effective (My Google Advertising Profile Thinks I am a 60+ year old man) in matching browsing history with consumption habits, they are getting more precise by the day. However, regardless of how the consumption data is gathered (online or offline) these algorithms use specific consumer profiles to categorize each consumer. According to Experian, outlined in their Consumer Lifestyle Segmentation for the United States document, Experian analysts consider more than 600 variables to create classifications for these consumer profiles. They rely on about 300 variables from various consumer characteristics such as: Demographic, Socioeconomic, Property Characteristics, Location, Behaviors and Interests. Some of the notable variables to consider are: Age, Ethnicity, Income, Education, Language Spoken, Social Status, Rurality, Credit Cards, Mail responsiveness, etc. Using these metrics and data, Experian has developed various profiles with politically correct names such "Metro Fringe", "Remote America" or "Urban Essence" not to offend a certain demographic but to categorize, package, define and reduce these populations to a discriminatory label.

Urban Essence: Nations least-affluent group, a collection of relatively young minorities living in older apartments. More than half of the households consist of African-Americans and Hispanics. With their low education levels and household incomes, residents lead unpretentious lifestyles. Many spend their leisure time playing sports. With their above-average household size, they make a strong market for children's toys and electronic gear, especially video games, dolls and board games. They have high rates for enjoying traditional media, reading ethnic-targetetd magazines, listening to Jazz and urban contemporary radio and, especially, watching television."

Though this type of consumer profiling might have been motivated by making a better sense of customer types for Advertising and Marketing agencies, the practice and method of profiling itself is beginning to resemble class / racial profiling or a cast system.  It is interesting that very few people see the danger of this type of profiling.  Not only these profiles generalize, make broad assumptions and stereotype based on people's choices and circumstances often driven by uncontrollable life situations, they facilitate and encourage inequality by creating an environment where consumers are treated differently based on their profiles.  It is not a stretch to imagine a scenario where a customer belonging to a more affluent profile receives more attention from a company or a store than someone who has been profiled to be of lesser means and financial status. 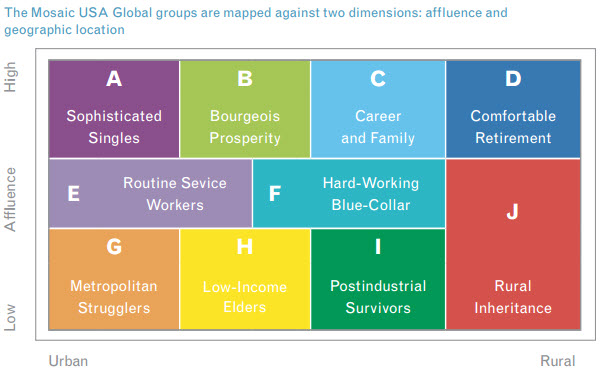 And where does this stop? How is it that similar profiling efforts by the government for National Security reasons are strongly opposed and protested against but corporations and Ad agencies can track, monitor, profile and box-ify people with very little noise? While government intelligence agencies have long been symbolized as mysterious spying entities with information on our every move, it seems like the symbolism is just that while major corporations such as Google, Facebook, Yahoo, Banks and Credit Agencies have much more intimate, private and detailed information on each person than the CIA or the NSA would ever dream of gathering.