Welcome To The Age of Inequality

This post was inspired by Jerry Z. Muller’s article in the Foreign Affairs Magazine titled Capitalism and Equality with input and great insight from +Andreas Rekdal and +Georgina Hernandez-Norris.

For the most part, we live in one of the most democratic, technologically advanced and connected times in the history of humanity. Though many autocratic governments remain with little appetite for total freedom or equality for their people, technology is making it easier for people to gain exposure to diverse ideas as well as to express themselves. Further, the age of technology and big data has democratized information across governments and corporations and allowed for voices of consumers and citizens to be heard and considered. It is all good news, but. But, for various reasons, what is emerging is a widening gap between the rich and the poor, the educated and the uneducated, the fit and the obese, the techie and the less technical person.  Some, like Jerry Z. Muller of the Foreign Affairs Magazine argue that inequality is an inevitable consequence of capitalism:

"Inequality is an inevitable product of capitalist activity, and expanding equality of opportunity only increases it -- because some individuals and communities are simply better able than others to exploit the opportunities for development and advancement that capitalism affords. Despite what many on the right think, however, this is a problem for everybody, not just those who are doing poorly or those who are ideologically committed to egalitarianism -- because if left unaddressed, rising inequality and economic insecurity can erode social order and generate a populist backlash against the capitalist system at
large." Via Foreign Affairs Magazine

Considering the different symptoms and signs of inequality, it's hard to argue against Muller that capitalism is not the culprit but before we simply agree with Muller let's look at different types of inequalities currently emerging in the U.S.

As the video above and the chart below clearly demonstrate, income inequality between the poor and the rich or the top 1% in America has been growing exponentially. This trend has gotten even more extreme as a result of the financial crisis of 2008 where job loss and income stagnation has affected the middle class and the poor the most while the stockmarket is enjoying all time highs.  As we will observe in the sections below, income inequality is the biggest driver of other inequalities in societies, especially education and rate of kids' success in school.

"As the economist Friedrich Hayek pointed out half a century ago in The Constitution of Liberty, the main impediment to true equality of opportunity is that there is no substitute for intelligent parents or for an emotionally and culturally nurturing family. In the words of a recent study by the economists Pedro Carneiro and James Heckman, "Differences in levels of cognitive and noncognitive skills by family income and family background emerge early
and persist. If anything, schooling widens these early differences."
Via Foreign Affairs Magazine 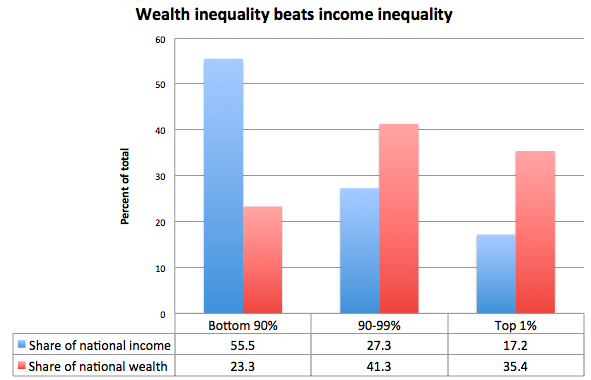 Education
The inequality that exists in education today is ironically caused by the very meritocratic system that was designed to ensure equal opportunity. For example by making school admissions criterion based solely on merit, this system assumes that everyone starts out with all the right or equal resources and life circumstances. Such that success or being smart is now only a function of willpower, studying habits and talent for a certain subject. This assumption is however not true since income, geography, social networks (by choice or born into), life situations and access play instrumental roles, most of which fall outside of one’s control. As a result, meritocracy often favors the privileged or the rich, whom can create and provide those ideal life circumstances for their kids to become successful in life. Of course there are always those who overcome their unfortunate life circumstances to become great academics, businessmen or politicians but statistics tells us that the odds are against them. This type of inequality is especially dangerous because it can lead to other inequalities in health, income, quality of life and a complete disconnect between the smart elite and the less educated parts of society.

"Low-income students with above-average scores on eighth grade tests have a college graduation rate of 26 percent — lower than more affluent students with worse test scores. Thirty years ago, there was a 31 percentage point difference in the share of affluent and poor students who earned a college degree. Now the gap is 45 points. The gap has also grown in college entrance rates and spending per child on tutors, sports, music and other enrichment activities." Via The New York Times 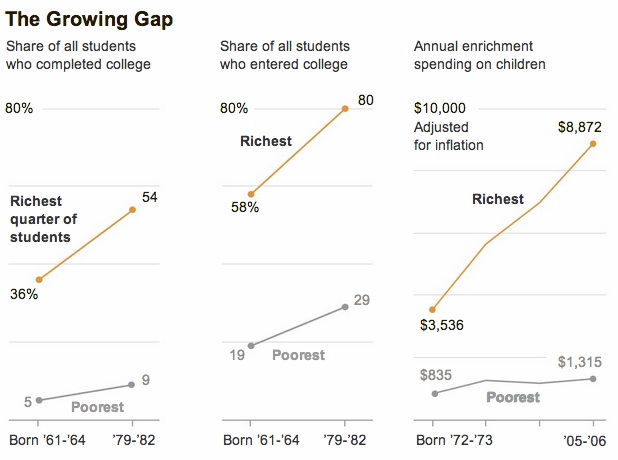 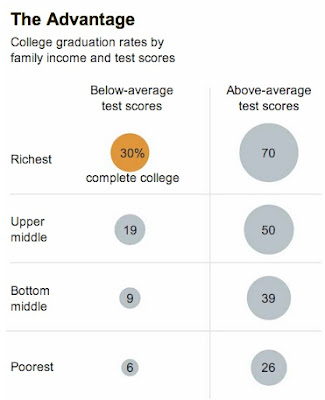 Graphics via The New York Times

Inequality in health is most evident as one travels through different parts of the country. The more affluent urban areas seem to have fitness, yoga or CrossFit centers as well as Whole Foods Market stores in every corner challenging Starbucks for urban real estate dominance. In contrast, more rural or low income urban areas and neighborhoods not only have very few fitness centers or healthy food supermarkets but rather are full of fast food restaurants. In addition, the inequality of access and use of technology and the internet when it comes to health related information between different demographics creates another inequality factor. Lastly, the inequality of patient care and access to health insurance is a major factor between those who do not receive proper or preventive care versus those who receive proper or even sometimes too much care. Now-days it’s only a bit ironic to observe the CrossFit phenomenon that’s sweeping across the country and creating superfit individuals while constantly hearing about the obesity epidemic and crisis.

Unfortunately, while technology has democratized information and data, its rapid evolution has also created inequalities in many other areas. From the job market to simple daily functions there is a widening gap emerging between techies and those whom are falling behind the accelerating technology curve. Not only the tech-savvy use technology and the internet to their advantage but they also know how to protect themselves against its evils. As such, the average non-technical person is handicapped in this environment, struggling to keep up. This is especially evident in the job market where as Christopher Mims points out, quoting Marc Andreessen in his article (How The Internet is Making Us Poor) that in the near future there will be two job categories: “People who tell computers what to do, and people who are told by computers what to do.” Of course the difference in average income between these two categories will be extreme. We can already observe the increasing concentration of venture capital and wealth in Silicon Valley, the hub of internet and big data technology companies, while other parts of the country and sectors are struggling with stagnant job markets and wages. Additionally, as technology attempts to make every process as efficient as possible, it eliminates many jobs that humans traditionally have performed.


The Inequality Black Hole
What’s obvious from all the inequalities mentioned above is that they are all related. Someone with disadvantaged and challenging life circumstances will less likely be able to attend school regularly and concentrate on learning. He or she will at the same time be less likely to have access to proper food, healthcare, technology and the internet as well as successful role models or mentors. This disadvantage can haunt one as unfortunate life situations lead to poor school performance and education, low wage jobs, health problems due to cheap junk food which might further prevent the person from achieving their potential. The black hole of inequality is such that in an extremely competitive and individualistic society as ours once one starts from a disadvantaged position, there are so many obstacles that prevent one from breaking out of this black hole and becoming successful. In a society where access to good education, healthcare and technology is a function of money, inequality becomes part of its DNA to a point where people become resigned to it and never question the system as such, just themselves and their parents for their lucky or unlucky life circumstances.

"The inequality that exists today, therefore, derives less from the unequal availability of opportunity than it does from the unequal ability to exploit opportunity. And that unequal ability, in turn, stems from differences in the inherent human potential that individuals begin with and in the ways that families and communities enable and encourage that human potential to flourish." Via Foreign Affairs Magazine