Death: When the “real” intrudes into reality 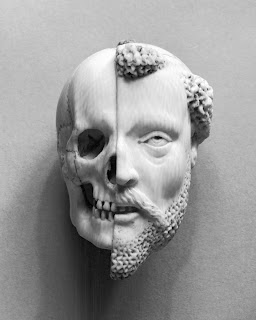 Those rare times when the "real" intrudes and disrupts our symbolic reality, the bubble we construct to filter out the chaos of the real dimension of life. The subject makes every effort throughout his or her life to keep the "real" at bay, at a distance, through the symbolic prism of language, making up stories, religions, and memes that give an illusionary order and "meaning" to the chaos of the real [life]. But what's so frightening about the real is that it refuses to be symbolized, understood, or explained. All we can do is to maintain a distance.


Death is the ultimate intrusion of the real into our symbolic reality space. It refuses to be symbolized, explained, and understood. No one is ready for death, not even the religious. I met this "real" when my mom passed away 10 years ago. Holding her cold and lifeless hand in mine, I came face to face with the inevitable, the real, the complete chaos of life that simply refused to be understood, to have meaning, to be explained. The severe emotional pain aside from losing her, what was so disturbing and emotionally unsustainable was indeed this meeting with the extremely brutal and chaotic [real] dimension of life. No religious or self-imagined explanation was adequate to explain that moment away and ease my mind. Some said it was part of a god's plan, others admitted to a lack of explanation but added that there must be a meaning or a higher purpose, "beyond our understanding". To me, these failed attempts to explain death are simply desperate attempts to put death or the "real" back in its place, at a safe distance from our daily reality, beyond the borders of our reality bubble. Through conscious or unconscious self-deception we are able to comfort ourselves, hiding in our own version of Plato's cave away from the chaos of the real outside even if we are fully aware of the inauthentic nature of things in Plato's cave.

My dad often comforts me about money, health, and work when I talk to him on the phone. What I've begun to realize is that these conversations or even myself for that matter are means to an end. He is rather attempting to comfort himself through me as some kind of external authoritative observer that validates and gives reality to his stories or a mirror of some sort that simply echoes his message back to him. Similarly, we all made up our own stories to convince ourselves that my mom would get better and beat cancer even in her last days, that this was just a temporary hospital stay. The real of course does not care for our stories and illusions and is a sobering reminder of the chaos of reality that is always lurking behind the scenes waiting to intrude.

I feel like what often is most disturbing for people when visiting a dying person, is the reminder of the real, and that no matter how hard we try to protect our symbolic universe from intrusions by the real, it is only a matter of time before we are faced with the truth that there are no truths or order, but just complete chaos. Deep down, we are all of course resigned to and hence paranoid about the existence of the real, but we must keep up the facade of the symbolic universe to maintain the social order as such.

Just like classical physics fails to explain the laws of the universe or lack thereof at the quantum level where reality is complete chaos and barely "understandable", our symbolic models and modules fail to help digest death and the real. We have created our own versions of reality, like an onion, made up of layers and layers of stories, dogma, ideology, and false explanations to ensure protection from the chaos of the real. But just like through psychotherapy we learned that there is no conductor behind the curtain of the self at the core of the mental onion, physics, having peeled the layers of reality, informed us that nothing is certain, or explainable at the quantum level, not even nothingness.

And yet. And yet, the real fascinates us, alludes us, and is constantly gazing at us like the eye of Sauron. We always think about death, love to read or watch movies about death and dying, and obsess about health and disease. Life is a chaotic mess and the self an illusionary social construct maintained on a fragile foundation of stories, identifiers, social networks and belongings that we attach ourselves to, to prolong the illusion that there is an immortal, conscious, subjective observer we call the self. We all enjoy watching the sunset but of course, only at a distance. No one wants to get too close to the sun but one day the sun will get too close to us whether we or our "gods" like it or not.